The Beijing General Research Institute of Mining and Metallurgy (BGRIMM) completed a revised Bankable Feasibility Study on the Pakrut Gold Deposit. This BFS continues to be optimised. Construction of mine infrastructure commenced in October 2011. The underground mine construction commenced in September 2012 with production scheduled to commence in 2014.

In addition to the Pakrut Gold Project, CNG is focusing on three additional mineralized systems within the exploration licence area – Eastern Pakrut, Rufigar and Sulfidnoye. Drilling to date at these sites has been very encouraging.

The directors of CNG have a track record of operating successfully in Tajikistan and believe CNG to have been the first foreign company to obtain 100% ownership of a mining and exploration project in Tajikistan.

​In January 2012, the Ministry of Energy and Industry of the Republic of Tajikistan formally announced the issuance of a Mining Licence to LLC Pakrut for the Pakrut Gold Project. The mining licence is valid until 2nd November 2030 and the amount of ore that can be mined is variable depending on the mine plan. The mine plan submitted to the Ministry envisages an initial processing capacity of 660,000 tons of ore per annum, increasing to 1,320,000 tons per annum from 2017.

The reserves of the Pakrut project under the Russian classification system, which total 1,257,454oz Au at a cut off grade of 0.5g/t, were approved by the State Committee for Reserves (GKZ) of the Republic of Tajikistan on the 15th December 2008. This approval gave CNG the exclusive right to a full mining licence valid for 20 years, which was subsequently granted in January 2012.

Summary of Mineral Resources as of 28 February 2013

Summary of Mineral Resources as of 28 February 2013

The total cost per ounce including depreciation and amortisation is US$576, after taking into account external information available and adjusted according to prevailing market prices and forecasts over the period of production. Royalties have been calculated at 6% of sales revenues and corporate income tax at 15%, according to the relevant laws in Tajikistan.

The Pakrut Gold Project lies within the southern portion of the Tien Shan Fold Belt, a belt of folded rocks that extends from near the Aral Sea in Uzbekistan through the northern part of Tajikistan into China and then into Mongolia. The Tien-Shan Fold Belt contains the world's second largest known gold resources after the Witwatersrand in South Africa. Pakrut is located three hours by road northeast of the capital city of Tajikistan, Dushanbe.

LLC Pakrut, a 100% wholly owned subsidiary of China Nonferrous Gold Limited (formerly Kryso Resources Corporation Limited), was granted an exploration and trial mining licence over the Pakrut Licence Area in April 2004, an exploration area extending over 6,300 hectares. This area comprises the Pakrut and Eastern Pakrut gold deposits as well as deposits and mineral occurrences at Rufigar, Sulfidnoye and Surmyanoye. The exploration and trial mining licence is valid until 1 April 2014 and is renewable.

There are three additional mineralized systems within five kilometres of the main Pakrut gold deposit. These are the Eastern Pakrut gold deposit, the Sulfidnoye gold and silver prospect and the Rufigar prospect. Drilling has been carried out and is continuing at Eastern Pakrut and Rufigar. For more information on the Sulfidnoye and Rufigar prospects please see the Pakrut Satellite Prospects section of the website. 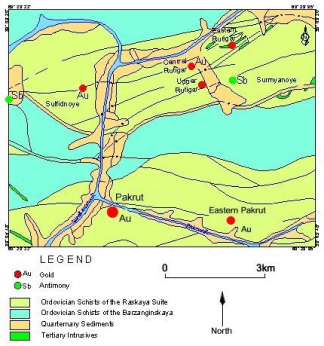