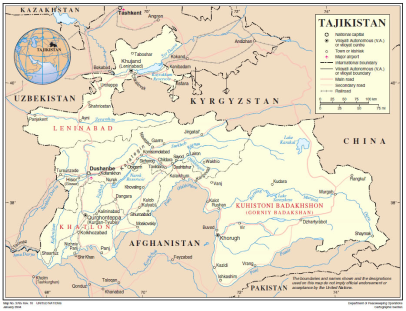 Tajikistan is a landlocked country in Central Asia with a land area of approximately 143,100 square kilometres. Tajikistan was formerly part of the USSR, and borders Uzbekistan (to the West), Kyrgyzstan (to the North), China (to the East) and Afghanistan (to the South).

Ninety three percent of Tajikistan is mountainous with altitudes ranging from 300 metres to 7,500 metres. Nearly half of Tajikistan's territory is at an altitude in excess of 3000 metres. Only five to six per cent of the land area is arable, with cotton being the most important crop. Mineral resources include gold, silver, antimony, tungsten and uranium.

Tajikistan has a population of approximately seven million people and is predominantly Sunni Muslim, although its constitution is secular. The capital city Dushanbe is the largest city in Tajikistan with a population of approximately 600,000 and is situated in the southern part of the country. Tajik (closely related to Persian) is the official language, but Russian is widely used in government and business. The Somoni is the national currency.

Tajikistan came under Russian control in the early part of the nineteenth century and then became part of the Soviet Union until it gained independence on 9 September 1991 following the breakup of the USSR. The President of Tajikistan, Emomalii Rahmon, has served since 6 November 1994. The President is elected by popular vote for a seven year term, the most recent elections having been held in November 2006.

Tajikistan has completed its transition to peace and stability following the civil war of 1992 to 1997, and there have been no major security incidents in recent years. A heightened international focus on Central Asia in the wake of the war in Afghanistan has brought increased economic development assistance to Tajikistan, while the country is in the early stages of seeking World Trade Organisation membership and has joined NATO's Partnership for Peace.

Since independence, investment in mining has increased in Tajikistan. There are several precious metal mines already operating in the country, including Jilau (gold), Andrasman (silver) and Aprelevka (gold/silver). In addition there are a number of base metal deposits in the country. In neighbouring countries there are numerous extremely significant gold deposits that occur within the same lithological sequence and structural zone, which is known as the Tien Shan Fold Belt.